The Power of Ten

And The Power of Ten doesn’t end there! Space Apps will feature four new and more inclusive award categories this year, for a grand total of ten Global Awards. See details here! As always, Space Apps winning teams are invited to view a rocket launch as NASA’s guests.

The 2021 challenge statements also echo The Power of Ten theme, including challenges for participants of all ages and skill levels that feature empowerment and “super powers.”

From a communications point-of-view, the 10th anniversary of Space Apps will serve as a rallying point to amplify and expand upon the efforts of previous Space Apps Challenges as we build for a more connected and engaged community, year-round. This year we will also celebrate a decade of collaboration, innovation, discovery, and community-led solution creation. Amplifying community stories will be at the forefront while we highlight 10 years of leaders and achievements. Stay engaged with Space Apps on social media (@spaceapps and #spaceapps) to see how you can be a part of it all!

Space Apps wasn’t always the largest global hackathon in the world. The first Space Apps in 2012 was attended by approximately 2,000 people at 25 events in 17 countries— still a great outcome, but over the past ten years, the program has grown rapidly in numbers, breadth, and depth. Take a look at the figure to see how the number of participants, number of events, and number of countries hosting events has climbed steadily over the past decade! These statistics reached their heights last year during the pandemic with the addition of the Space Apps COVID-19 Challenge event to the yearly Space Apps 2020, culminating in a grand total of over 40,000 participants engaged and 250+ “local virtual” events run by Local Leads in 87 countries! 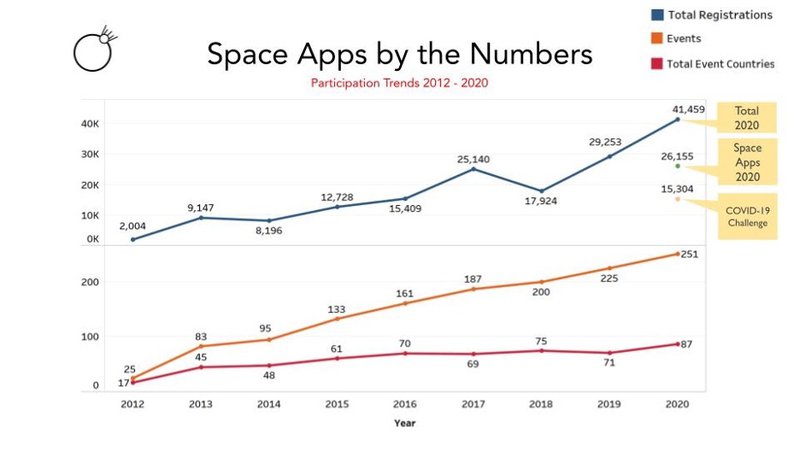 The Space Apps Local Leads are the jewels in the space apps crown— the event wouldn’t be possible without them— and Space Apps 2021 will feature the largest number of Local Leads in Space Apps history! Local Leads organize a virtual event for a specific city or town, working to increase local awareness and engagement of the Space Apps Challenge taking place each October. Interested in becoming a Local Lead next year? Beginning July 16, 2021, you can complete an interest form to be one of the first to hear about when the Space Apps 2022 Local Lead Application opens at https://www.spaceappschallenge.org/resources/apply-host/.

Now back to the retrospective: In the early years, Space Apps was mostly focused on space science and technology; however in 2017, Space Apps moved to the NASA Earth Science Division and expanded to include both Earth and space science and tech. The result? A spike in participation in 2017. Space Apps has undergone another transformation since then, as we began to feature more arts and humanities challenges alongside the technology challenges. The result? A more inclusive program with broader appeal, the highest participation numbers ever, and a marked increase in projects submitted with technology and the arts themes.

The Next Decade of Space Apps

Where will all of this growth and success take us in the ten years to come? The Space Apps Global Organizing (GO) Team has big plans for continued expansion and improvement of quality for the program. The name of the GO Team’s strategy for the next decade is “Space Apps X,” and details will be forthcoming as soon as NASA clears us to announce them! Dying for a hint? Think spinoff programs and a revamped platform ;)

Thank you to everyone who has been involved with Space Apps over the past ten years -- participants, volunteers, space agency partners, and NASA enthusiasts! We hope you’ll join us for this year’s event -- and for the next ten years! Happy Hacking!