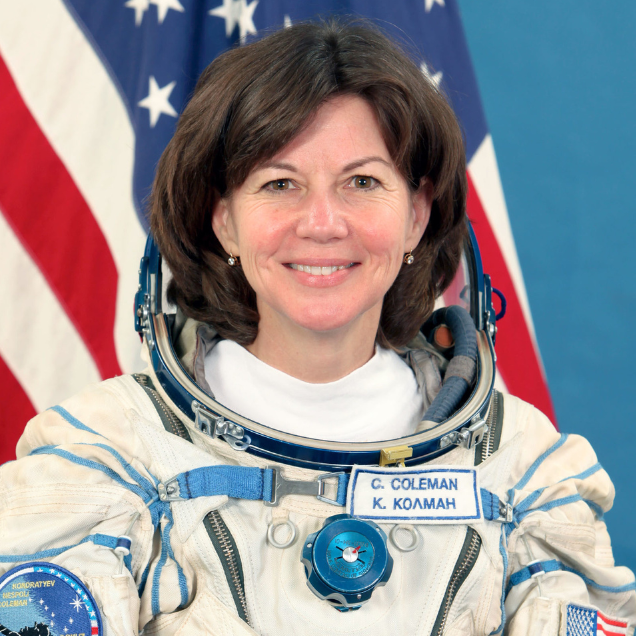 Dr. Cady Coleman, a former NASA astronaut, has been a longtime and legendary supporter of the NASA International Space Apps Challenge. Having spent more than 180 days in space, Cady has flown on two space shuttle missions and a six-month expedition to the International Space Station (ISS), where she acted as the Lead Robotics and Lead Science officer.

Cady is a vocal advocate for inclusion in STEAM (Science, Technology, Engineering, Arts, and Mathematics) fields, and she works in many ways to inspire the next generation to get excited about space and science. Cady invites everyone to “Make Space” with Space Apps this year, no matter who you are.

In this Q&A, Cady shares what empowerment through innovation, creativity, and inclusion in STEAM and space can look like for communities.

“I absolutely think that all of us need to be a part of STEAM solutions, whether you are more of a technical person or not. Whatever your skills are, they can be applied to science, technology, engineering, arts, and math. The “A” – for those with artistic skills – is not only important, it is imperative. Artists have a valuable perspective and approach things much differently than many scientists, engineers, and technologists do. Artists help us to tell stories. These are the writers, songwriters, and visual artists who help others connect with a topic and say to themselves, ‘Oh, now I understand!’

“Space Apps provides the opportunity for communities to become more fluent in STEAM because it creates a collaborative environment for learning and solving. It’s a great example of an environment where everyone’s point of view and skill set is seen as important.”

You are not only a former NASA astronaut, but also a chemist and engineer. Have you always been interested in space and science?

“All of us are good at different things. I always loved cooking as a kid. But it wasn’t until I was in high school that my interest and skills in chemistry were validated through the influence of a chemistry teacher who believed everyone needed chemistry. She would look right at me when she taught, and that made me believe in my ability to be a great chemist. But my experience learning physics was a different story. Physics is not instinctive for me in the way chemistry is. When I was learning physics I would typically have to ask at least one person to explain it to me again. And guess what? That's okay! It was worth it for my physics teacher to go back a couple of chapters so that I could have the context I needed to go further. My contributions to physics are proof that even if something is difficult for you to learn, that doesn’t mean that you can’t make significant contributions in that field!”

Did anyone inspire you to become an astronaut?

“It started with my mom, who taught me to believe that I could be anything that I wanted to be. I was also inspired by several teachers who encouraged me and seemed to really think that I could accomplish anything. One of my inspirations was meeting Sally Ride, the first female NASA astronaut to go to space, when I was a junior in college. At that time, I thought the space program was interesting, but it never really occurred to me that I could be part of it. When she showed up in her flight suit with her shoulder-length dark hair, just like mine, it made me think, ’Wow, maybe I could do that.’ Because to me, for the first time, I saw someone who looked like me actually working in that field.”

“Make Space” reminds us of the Space Apps Diversity, Equity, Inclusion, and Accessibility commitment that “there’s always space for one more.” What does “Make Space” mean to you?

“Our planet and space are for everyone, and that’s why having a diversity of role models in every field is important. It’s important to see people who look like you and share your experiences and interests. Even when we watch characters in TV shows and movies, we want to relate to people who are similar to us. Whether it’s about different sizes, shapes, colors, ethnicities, or religions, all of us want to feel seen. The same goes for STEAM, space, and science fields. “Make Space” makes it possible and shows how important it is that anyone and everyone is welcome to get involved. It feels good when somebody says, `We noticed you and we want you on our team.'"

Why should people participate in the Space Apps Challenge?

“People should participate because this helps solve real problems NASA and the space community have. There are a gazillion challenges involved in going back to the Moon and keeping people healthy on a space station, and NASA and its partners cannot solve all of them. The answers to these challenges are sometimes broken up into pieces and any piece that you can help solve by bringing in your unique point of view and skill set is so very important.

"I would tell anyone interested in participating in Space Apps the same thing my chemistry teacher said to me: 'You can do this.'”

What about Space Apps do you most look forward to each year?

“The range of people that participate in Space Apps is really interesting. At Space Apps, teams don’t just form spontaneously and everything works out – it is about the community effort. At the very beginning of each Space Apps season, the community looks at every person to ensure everyone has a home and team. It’s brave to show up and brave to be on a team. When it comes to solving challenges, it can happen so quickly. In just a few hours, you will be a part of solving an incredible challenge and you'll realize, ‘Wow, I showed up!’ Space Apps actually makes sure that kind of facilitation happens from the start until the end. You will walk out differently. There's no question in my mind.”

While orbiting Earth on the International Space Station (ISS), Cady coached actress Sandra Bullock in preparation for Bullock’s astronaut role in “Gravity.” If you’d like to learn more about Cady and her advocacy for inclusion in STEAM, check out the podcast she co-hosts, Mission: Interplanetary, or her website. You can also catch Cady in the astronaut band “Bandella,” where she plays the flute! Follow Cady’s journey on Instagram: @astro_cady, Twitter: @astro_cady, and Facebook: @Cady Coleman.

As always, NASA Space Apps welcomes you, wherever you are in the world, to join the Space Apps community and to build global collaboration and innovation with us. Registration is open! Join us and “Make Space” with us this Oct. 1-2, 2022.