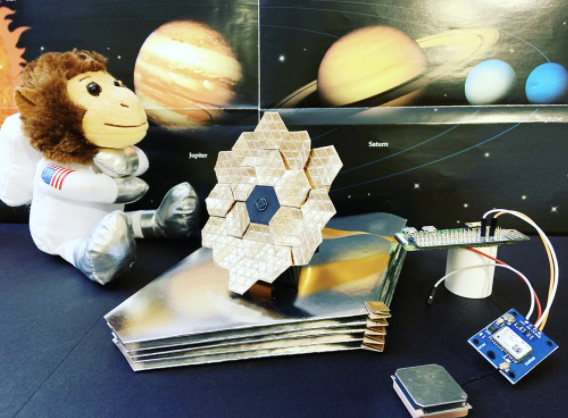 On Dec. 25, 2021, the James Webb Space Telescope made its long-awaited launch to study the universe as we never have before, from the first galaxies of the universe to our own solar system. I am so proud of the tremendous work of thousands of people around the world, including the teams at NASA and partners at the European Space Agency and the Canadian Space Agency. As Webb lifted off of the ground in French Guiana, I was so inspired by seeing their innovation and creativity come to life.

As Webb successfully unfolded in space – a very complicated process involving more than 50 major deployments comprised of hundreds of steps – engineers in the mission control center were not the only people glued to their screens and cheering it on. Space exploration enthusiasts from all around the world joined in, including a NASA Space Apps Challenge team of two high school and two middle school students from Boston, Massachusetts. The team showed their enthusiasm for Webb by creating a computerized origami Webb prototype during the 2021 NASA International Space Apps Challenge. Their project was named one of the 10 Space Apps Global Winners for 2021!

Team Jimmy in the Box

Hanna, Takeshi, Yuto, and Misaki were among the 28,000+ registrants of the 2021 Space Apps Challenge, the largest annual global hackathon on Earth. As they browsed the dozens of challenges offered by NASA subject-matter experts, they were most intrigued by the Webb Origami Design Challenge that asked participants to showcase Webb as a technological and design marvel using an “arts-meets-science” approach. Combining science with arts can lead to ingenuity – and I am delighted that Webb served as a source of inspiration for these students.

The team members already had some experience with origami crafting, as well as Internet-of-Things (IoT) programming with a small single-board computer. Using their diverse set of skills, the team built computerized origami models of Webb that showcased its unique design and deployment steps.

The team’s name, “Jimmy in the Box,” was inspired by its members’ interpretation of the Webb deployment phases because it reminded them of the old-school jack-in-the-box toy. They replaced the name ‘Jack’ with ‘Jimmy’—a common nickname for James—as a tribute to former NASA administrator James Webb, the telescope’s namesake.

“It was a lot of fun to craft, code, and learn something completely new for us,” said Misaki Tatsumi, one of the members of the “Jimmy in the Box” team. Misaki touches on one of the biggest lessons when starting to explore the world of science: learning something new is a key part of the process. Not only that, but the team also used something ancient – origami – and combined it with something modern – coding – to achieve their goal. It reminds me of what I see every day at NASA: scientists asking, “How can we use the experience we have and that of those before us to achieve something that’s never been done?”

The Jimmy in the Box team has prototyped several computerized origami models that can work as IoT devices and can both access the Internet or be accessed via the Internet. They wrote Python apps for their models that can direct the telescope to take pictures and keep track of the current device location (latitude, longitude, and elevation) with GPS receivers. The team also created a webpage to not only showcase their work, but also to teach others how to reproduce the origami crafts and build their own IoT telescope models through instructional videos, circuit diagrams, and ready-to-run programs.

The team’s creativity and desire to share what they learned motivated the Space Apps judges to select “Jimmy in the Box” as the “Arts and Technology” global award winner. This category recognizes solutions that combine technical and creative skills. In recognition of their accomplishments, we are looking forward to hosting the team at a future mission launch.

As I wrote in a recent blog post reflecting on the outcomes of the 2021 Space Apps Challenge, I hope that Space Apps serves as a model for how we as a world approach problem-solving. I absolutely love this program and I cannot wait for future implementations of this amazing innovation and engagement tool. Congratulations to this inspiring team of innovators!

If you are also interested in solving some of the world’s most interesting Earth and space-related challenges using NASA and partner space agency data, join us for the next NASA International Space Apps Challenge hackathon on Oct. 1-2, 2022! Or, host your own local Space Apps event by applying here!